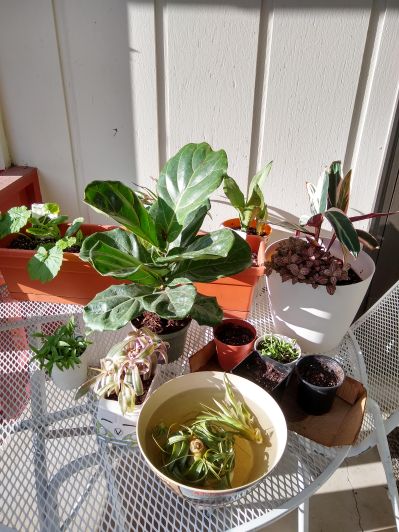 The first Father’s Day after my father died, I was having a low-key, but difficult day. Nothing dramatic, no great outpouring of grief, just a sad day spent mostly on the verge of tears that never really came. That afternoon, Julio went on an errand and came home with a Fiddle Leaf Fig that he named The Last One. I had been filing our apartment with houseplants and he had made me promise that I wouldn’t bring home anymore for a while, but I really wanted a Fiddle Leaf Fig. So here it was, the last houseplant. (Or so he thought.)

It was a sweet gesture, tacitly acknowledging that he knew I was down in the dumps and that there was nothing he could do about it except to bribe a smile out of me with a houseplant. As we sat on the balcony admiring our new addition, I explained to him that I wanted the Fiddle Leaf Fig because it was notoriously finicky—a real challenge to my fledgling gardening skills—but if kept happy, it could grow to the ceiling over time.

Fiddle Leaf Figs are native to Africa and love humidity. We technically live in a high desert climate so, even running a humidifier, I was never going to be able to convince this baby that it was in the jungle. I had also read that you could kill a Fiddle Leaf Fig just by breathing wrong near it. I was determined, however, to keep The Last One growing. 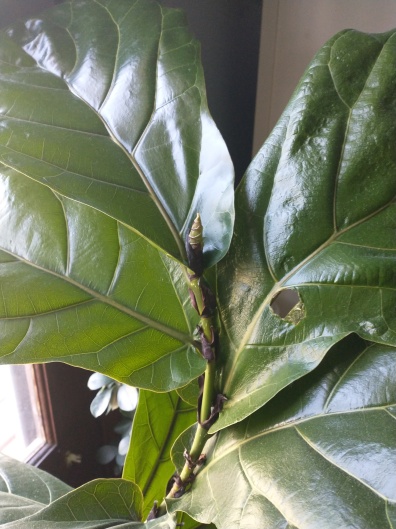 I bought Fiddle Leaf Fig fertilizer, dutifully applying it once a month through the summer, and watered it exactly one Ball jar a week on Saturdays. I soon deduced that the humidifier was unnecessary, as it made no real difference in the humidity. I opted instead just to keep my tropical plants clustered together, sharing the sunlight and the moisture they “exhaled.” Over the summer and fall, the Fiddle Leaf Fig grew about a foot. I was delighted. I celebrated every new leaf that emerged, first as a tight coil, gradually unwrapping into a bright green, tiny leaf that, over time, grew and darkened into a deep green violin shape. 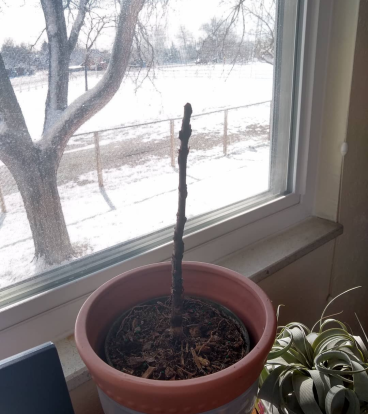 In January, we moved to our house. I was prepared for the Fiddle Leaf Fig to drop some leaves in response to the change in environment as everything I read about the plant suggested that big changes could stress the poor thing out. At first, it seemed to be enjoying its new home next to a sunny South-facing window. Then, I came down one morning and leaves had dropped to the kitchen floor. They were weirdly far away from the plant, but I thought the dog must have accidentally dragged them away with her tail.

A week or so later, I came downstairs in the morning and discovered that the top half of the plant was missing, leaves and all. My once lush Fiddle Leaf Fig was now a potted stick. There was nary a leaf in sight. Something did not add up.

I was in the midst of the first trimester of pregnancy and we had just moved and murmurs about a possible pandemic were starting, so I did not think much about the plant. I didn’t throw it away, but I put figuring out what happened on hold.

A couple of weeks later, now under lockdown in the early days of the Covid-19 pandemic, Julio was coming upstairs one night when he saw a rodent dart from the dog’s bowl to hide behind the refrigerator. The following night, I dusted the area with flour to confirm what he saw. The next morning, tiny footprints were in the flour. Julio was thoroughly creeped out, but I had an a-ha moment. When Julio moved the refrigerator to see if there was a hole there allowing a rodent to enter the kitchen, he found a hole and I found a few pieces of Fiddle Leaf Fig leaf. 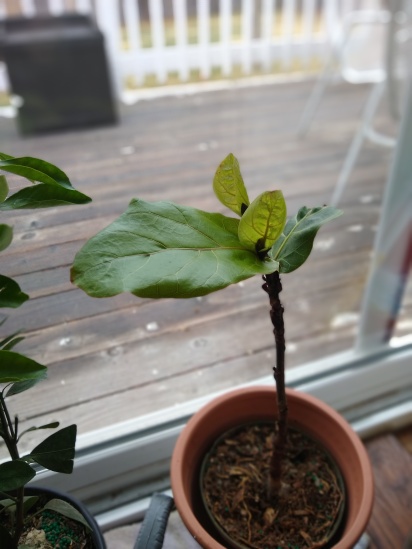 Getting rid of the packrat that was breaking into our home each night through a gap under our balcony was a long process and a different story, but now I had an answer on the plant. It wasn’t dying; it had been robbed. I moved The Last One and the small orange tree we were given as a housewarming gift to the west-facing window in our bedroom and leaves and fruit stopped disappearing. A month later, the Fiddle Leaf Fig had a handful of tiny leaves. It kept growing and I kept fertilizing it once a month and watering it deeply once a week. A year later, I repotted it into a bigger pot. Almost two years later, it is hip-height and still thriving. 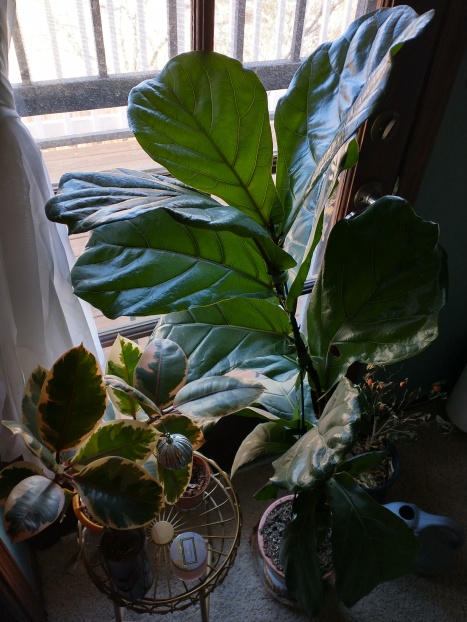 I watched the resurgence of The Last One with awe and amusement. I am generally pretty successful with my houseplants. I only lost one, a pothos, to the move, and I subsequently killed a young Parlour Palm because I couldn’t find the right spot or the right watering routine. Other than those losses, however, my little indoor jungle has done pretty well. None, however, have thrived like The Fiddle Leaf Fig who could. This plant, known for being easy to kill, so challenging to keep that Julio joined a Fiddle Leaf Fig support group on Facebook when he brought it home, has proved itself resilient beyond what I thought possible. I do not exaggerate when I say it was at one point a potted stick. The rat took all of the leaves and the young portion of the trunk. I couldn’t imagine that it would start producing leaves again without any way to take in sunlight. I am thankful that I neglected the plant in those first days after its losses, too distracted by another new life to count the plant as a loss. That pause gave it time to start again, growing back with vigor. Fickle who?  -Kasey

My Tips for Maintaining a Fiddle Leaf Fig 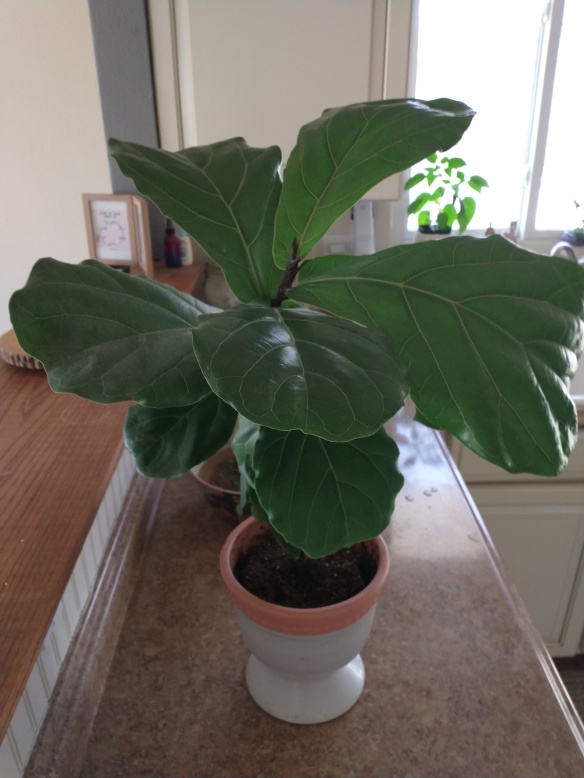